When I lived in NYC, I occasionally went to Jones Beach for the day. I felt sorry for the old grey-mottled sea gulls who, unlike their younger, pristinely white compatriots, were spackled and speckled with grey marks. Their bedraggled state struck me, the hippy chick from Oregon, as yet another sad manifestation of the city's grime and decay.

WRONG. The speckled and strippled sea gulls are in fact the juveniles while the unblemished, snowy-white birds are the adults; it takes a few years for gulls (like eagles) to achieve sexual maturity, which is indicated by the snow-perfect appearance. 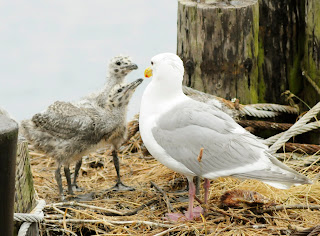 Thanks to expert bird spotter AZ, I shot these adorably spotted nestlings next to a ferry dock on Whidbey Island in late July. The charming polk-a-dots will have morphed into unsightly streaks by now. 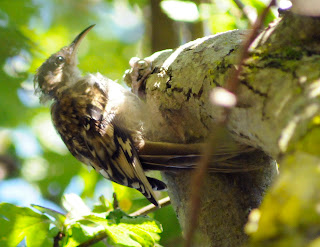 Another interesting phenomenon in some young birds is beak size.  I posit that some birds' beaks grow faster and disproportionately--sometimes reaching full size--before the rest of their bodies do. Case in point is this juvenile (note the fluffy down on its belly and head) brown creeper whose beak appear just a bit out-sized for its body. 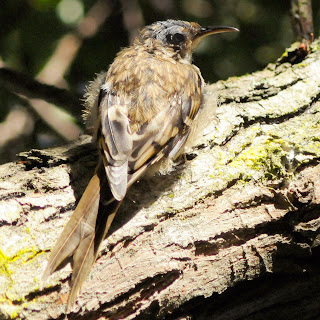