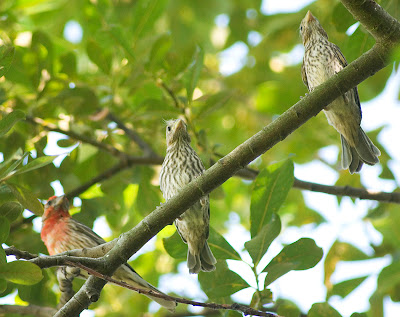 Lots of recently fledged birds around these days, like this cute ensemble of daddy house finch (accessorized in red) and two young with a bit of baby fluff-down still erupting from their heads, seen along Lake Union at the Montlake Community Center.  The middle finch features a hint of yellow coloration under its chin, indicating that it is probably male, and that it will one day sport  colorful head- and shoulder-gear like dad. Male house finches can vary in coloration anywhere between the red-orange-yellow spectrum, though red is most common.

A half-mile away at the Montlake Fill, insistent chirping led me to a little family of song sparrows creeping around in the grass. It looks as if there is at least a week's age gap between these two siblings: 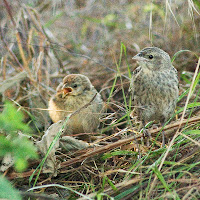 The one on the left exhibits many signs of its relative youth: it is smaller, has more yellow flesh around its beak and lacks the more precise feather coloration of the one on the right.  The female parent can lay a clutch of eggs over a period of many days (during which time she may mate with more than one male, creating a nestful of half-siblings), which leads to this apparent discrepancy in maturation.

The telltale fluff of youth (seen as white patches interrupting their otherwise sleek blue-black upper bodies) is also visible in this group of sunbathing barn swallows: 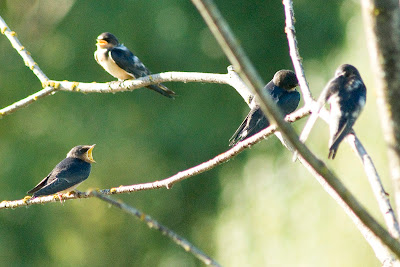 The final feather exhibit is the juvenile male red-winged blackbird whose nascent flame red-yellow epaulettes are foreshadowed by a patch of orange at the shoulder: 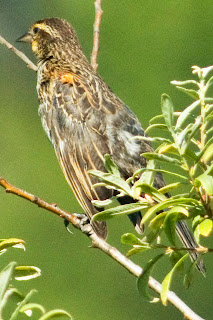