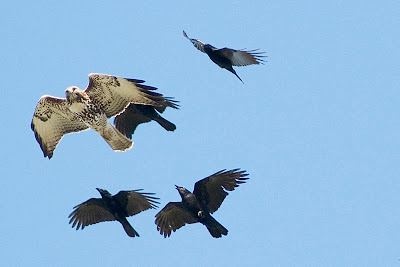 Who's the baddest mother in the ID? This red-tailed hawk, indifferent to a mob of nearly a dozen crows. 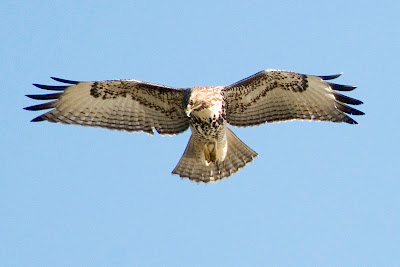 A high point of urban birding this morning: while finishing up my shopping at 12th and Jackson (one of the dirtiest, grittiest areas in Seattle which, I admit, isn't saying much), I looked up to see this juvenile gliding around, unperturbed by its corvid harassers and vigilant for potential prey on the ground. The theme from "Shaft" comes to mind:

Who's the cat that won't cop out
when there's danger all about
(Shaft!)
Right on
You see this cat Shaft is a bad mother--
(Shut your mouth)
But I'm talkin' about Shaft
(Then we can dig it) 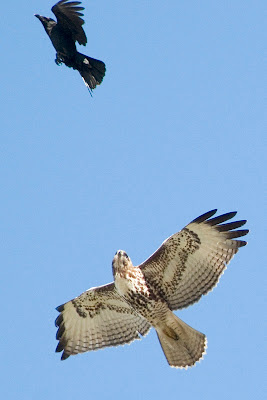 12th and Jackson is right next to I-5, where red-tails are not uncommon, so I think s/he must have glided west a bit on this exquisitely gorgeous fall morning. Note the two hallmarks of juvenile status: a pale, non-red tail and yellow eyes.
Posted by Clare McLean at 3:00 PM