There's been a birding hullabaloo in Seattle the past few weeks as an Acorn Woodpecker has been hanging out in Magnuson Park--a good one to two hundred miles north of its typical range. I made an unrequited pilgrimage to the parking lot where it has been documented. No sign of its clowny face. 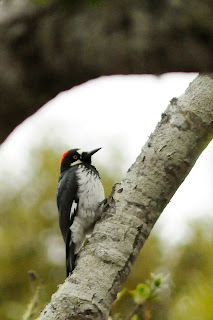 But this bad luck was offset by seeing dozens of them in Carmel, California this past weekend. In fact, it was the very first bird I saw as we checked in to our cottage on Friday afternoon.

They are among the most winsome of birds--anyone seeing an Acorn for the first time will unequivocally and delightedly state that they look like clowns--due the black, white and creamy yellow patchwork on their faces. Noisy and social, they are much more like parrots than woodpeckers, who are generally pretty solitary outside of the breeding season.

Another species I saw in spades was Anna's Hummingbirds, which are definitely part of the Seattle ornithological landscape. 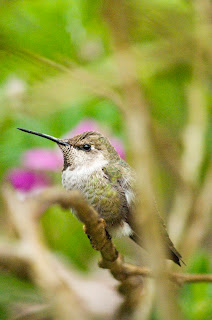 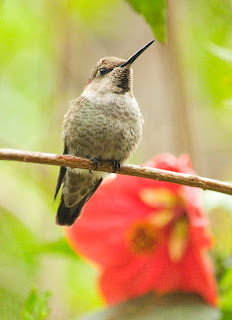 This one let me get within an arm's length of it for quite a few minutes. In fact, I had to move back a bit in order to focus on it as I was too close, which is a pleasant but rare occurrence when shooting birds! I think its lack of wariness was due to its juvenile status.
Posted by Clare McLean at 9:46 PM