Yesterday I had one of my favorite birding pleasures--I found a new "secret" place. My definition of secret is pretty loose; it only means that I've never heard anyone else mention it before.

Following my gut is often the best way to have the most rewarding and invigorating birding experiences. On a instinct-fueled whim--after a very unremarkable (translation: boring and frustrating) five hours of birding--I turned down a road outside Thorp and was met with bounty: a green prairie-like ridge exposed to sun and wind, offering up a family of deer, a kestrel, an un-shy Meadowlark and a trio of Osprey around a nest.

One of the osprey had a fish which apparently did not interest the other two enough for them to stick around. The fish-bearing Osprey circled around solo for about 20-30 minutes, and then devoured it alone. If anyone can enlighten me about the origin of the band and/or Osprey courtship rituals, please do! 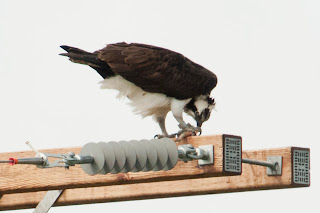 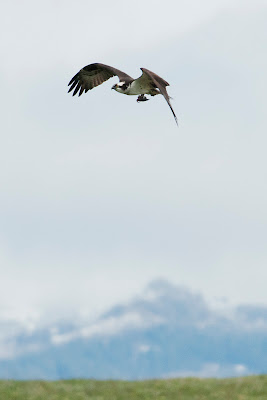