Yup, within a 10-minute walk of my house, barred owls are in residence. 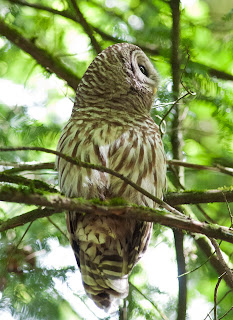 Territorial, vocal crows helped my locate both mother and father in Interlaken Park last week. Barred owls are of a mammal-like bulk (21" tall) and relatively unfazed by human presence--they will stretch, emit wisdom, yawn, gambol, sleep, be serene, faire la toilette, hunt, etc. within 10-15 feet of a person (in this case, me.) 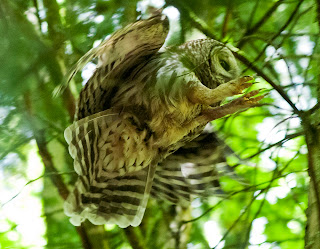 There is consternation and controversy regarding this species. According to the Olympic Peninsula Audubon Society:

I have mixed feelings about their presence. As an urban birder, it's a treat to be able to hang out with owls, but this gratitude is tinged with an uneasy awareness of their effect on other species. 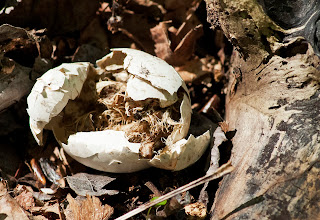 Here's a happy sight for a barred owl-hater: a partially-developed (feathers are visible) egg that I guess was ejected from the nest to the forest floor by a parent or perhaps taken by a raccoon. (If you know otherwise, please let me know.) Beetles are now devouring the partially developed and feathered remains.
Posted by Clare McLean at 6:28 PM