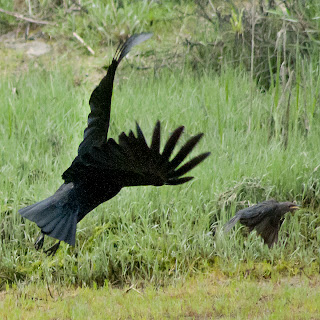 Preface: These shots are crappy and not up to BirdWordGirl standard; but they illustrate something not often seen, so it is worth sharing them, despite the damage they might wreak upon my PhotoEgo.

Yesterday morning at low tide along the Duwamish River. Lots of juvenile starlings around; this one got very unlucky. For two agonizing minutes, the crow plucked and pecked at the starling, who squealed and cried on its back, pedaling its legs in protest. Meanwhile all nearby starlings and robins went beserk with alarm calls.

The crow spent nearly as much energy defending its killing process from its voracious corvid colleagues as it did pecking at the starling. 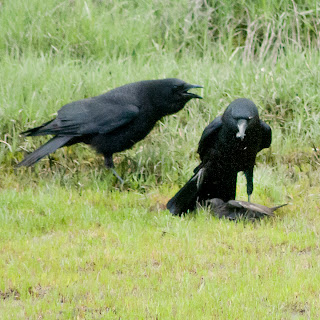 Frankly, it was a relief when the body was finally lifeless and feathers began flying as the crow tucked in. After a few seconds, the crow flew off with the body, assailed by its colleagues. 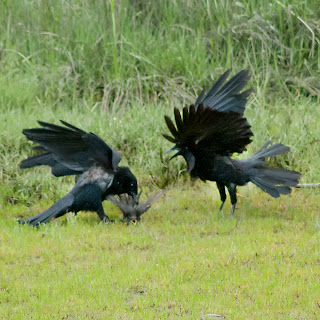 (Yes, I did briefly consider stopping the killing but the hard facts intervened: starlings are a non-native species which are numerous and at times quite harmful to native species.  If it had been a Flicker, my favorite bird, I would have gone ballistic on that crow's ass.)
Posted by Clare McLean at 3:43 PM