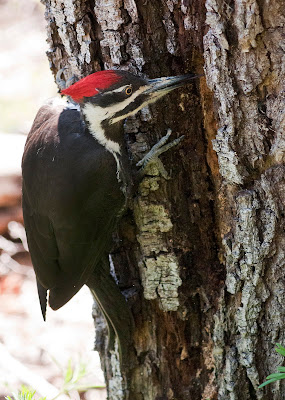 Biking along the Burke-Gilman Trail on Sunday was like zooming through a tunnel of Northern Flicker Love Songs. There was an unending necklace of wicka-wicka-wicka mating calls reverberating in the trees.

As I slowed down my bike to get my camera out, I was literally eye to eye with a Pileated Woodpecker (at left) in a tree.  These stout birds are remarkably skittish for the size, but this one was insanely indifferent to me and my camera. At one point, I was probably five feet away from her as she pounded a tree for insects. Her thread-like tongue is visible in this shot, emerging from the tip of her beak like a serpent's hiss.

Of course, I'm no ornithologist, but my guess is that during the mating and nesting season birds are so zealously finding nesting material and food to fuel their parenthood that they become somewhat oblivious to what would normally be a threat (a sweaty, dorky bike helmet-wearing human with a long camera lens). 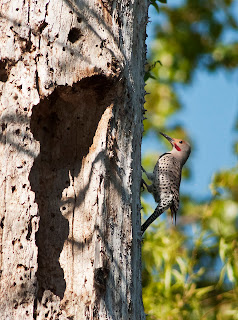 This male Northern Flicker (at right) was excitedly excavating a nesting hole alongside Lake Union.  Occasionally he would stop his pounding and make a mating call, which went unaswered.

A bit further away on the lake, I discovered a mated pair taking turns excavating their nest. About every 20 minutes one approached the nest, vocalizing to announce his or her incoming arrival to its mate who was working away in the hole. The vocalization helped me too--so that I could ready my lens to capture shots like this one below. 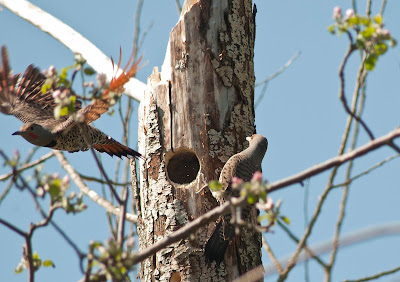