As we slog through "summer" in Seattle, which yesterday truly felt like fall with bushtits parading en masse through trees as if they were fattening for an imminent winter, I thought I would offer a visual jaunt to Mexico. 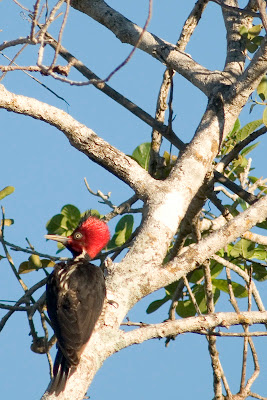 I'd caught some teasing glimpses of this pale-billed woodpecker throughout my week in Sayulita, and was finally rewarded with an unimpeded view outside my window on one of my last mornings. At 14", this magnificent male rivals the 16" pileated woodpecker for its bold presence and its almost mammal-like heft.  Seeing it gives me only a taste of what encountering a 20" ivory-billed woodpecker must have been like before its probable and much-contested extinction in the mid-20th century (possibly, in part, due to my ancestors' ownership and logging of pine forests in Arkansas.)

Apparently it was called the Lord God Bird because that was the involuntary utterance elicited upon seeing it. Indeed, there is something odd and alien about a large woodpecker--its movements more rigid and robot-liked compared to the delicate and dance-like actions of smaller songbirds. It seems poised somewhere between bird and mammal. Even though it is fearsomely large, it flees upon seeing a human, hence: 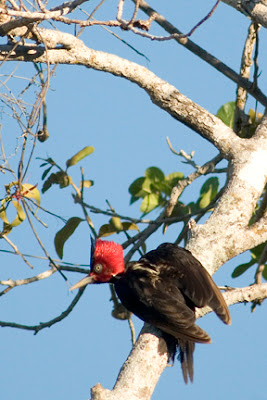