Steller's jays are usually even more rabidly territorial and cranky and loudmouthed than their fellow corvids, crows. In other words, if you breathe in their direction from 20 yards away, you will be raucously upbraided by a brilliantly blue bird as if you'd pulled out its nails without anesthesia. (Postscript 6/20: After watching the Italy v. New Zealand World Cup game this morning, I realize it's apt to liken the histrionics of jays to that of Italian footballers when they have been "injured" on the field.)

This morning I met a welcome and unusual exception to this rule--even more unusual because it was a juvenile accompanied by a parent, an occassian when outsized squawking has some merit. The parent was either on avian qualudes or got some sort of cease-and-desist order on the squawking. Here's the cute juvie solo with a little green insect ensnared in its toes and then begging for food: 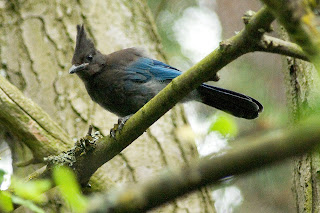 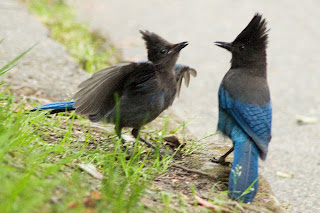 Notice the small light-colored spot where the beak joins the head (right), a telltale sign of a young bird. This slightly yellow or pink fleshy bit allows the bird to open its beak really wide for food, and reveals a startling reddish-pink mouth (see below). 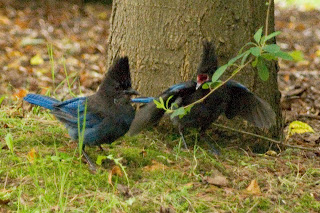 Also typical of begging behavior is the outstretched wings, which are shaken and/or lifted up and down very quickly as if the bird were trying to propel itself into the air.  It's rather telling that the drive for food and sex ellicits similar postures. Below is a juvenile crow in the same begging posture with its parent. 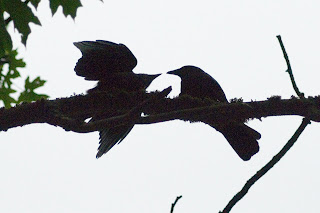