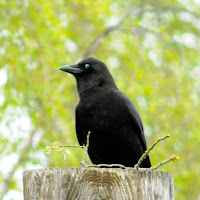 This crow is interesting for two reasons: one, its got some nesting material, and two, my shutter speed was fast enough (1/1000 sec) to catch the creepy occurrence of the nictating membrane.

See the grey-blue filmy look to its eye? Well, that's the membrane that nictitates.  Here's the low-down from Wikipedia:

The nictitating membrane (from Latin nictare, to blink) is a transparent or      translucent third eyelid present in some animals that can be drawn across the eye for protection and to moisten the eye while also keeping visibility. Various reptiles, birds, and sharks have a full nictitating membrane...Unlike the upper and lower eyelids, the nictitating membrane moves horizontally across the eyeball. It is normally translucent. In some diving animals, for example beavers and manatees, it moves across the eye to protect it while under water, and in these species it is transparent; in other diving animals including sea lions, it is activated on land, to remove sand and other debris. This is its function in most animals. In birds of prey, it also serves to protect the parents' eyes from their chicks while they are feeding them, and when peregrine falcons go into their 200 mph dives, they will blink repeatedly with the nictitating membrane to clear debris and spread moisture across the eye.

Back to nesting material: with its mate, this crow is building a nest in a very cramped tree crotch which is relatively close to the ground--maybe about 12' above the sidewalk. Amateur Hour. Here are the ways it could play out:
1. They will abandon the nest before laying as it is too close to pedestrian traffic (and nosy birders like me).
2. They will not abandon it, but the people who live in the apartment building not 10' from the nest will develop either a life-long hatred of crows due to the incessant cawing of incessantly hungry baby crows or a newfound appreciation for the life cycle of crows.