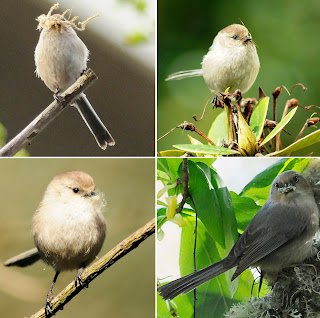 Sounds kinky, but I'm merely referring to some of our tiniest avian friends, the bushtits, and their appearance when ferrying nesting material from branch to branch in spring. Moss, lichen, feathers, dog hair, you name it. They are such teeny-tinies that a mere inch of moss can obscure an entire face (see upper left), giving the appearance of an exuberantly over-mustachioed dandy.

And this one carrying a little stick skewered with fluffy bits looks like Pinocchio:

And here is a crow in transport mode: 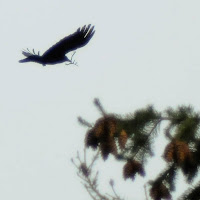