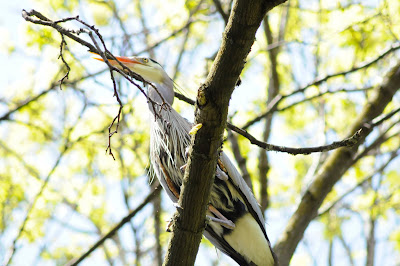 Watching a Great Blue Heron hunt for sticks and branches for his nest is, for birders, like watching the Wide World of Avian Sports: a show filled with the thrill of victory and the agony of defeat.

Herons are about as tall as a second grader and have a wing span of six feet. They employ acrobatics, yoga, and hormone-propelled ambition to snap branches off, which are then shuttled back to the nest for precision placement.

When approaching a potential branch, he crouches in a hunting posture as he does when hunting for food in water.

With his target in sight, he coils his neck back

and darts forward, serpent-like, to claim the branch with his indomitable beak.

Then the majestic struggle begins. He spreads his wings out to counterbalance the extension of his neck. 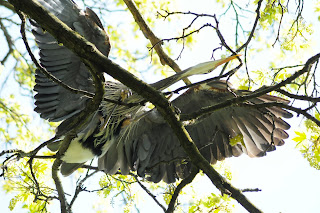 Then he begins to navigate back through the tree canopy, unwieldy branch in beak. This is where the agony of defeat can occur: when his path becomes too treacherous or obstructed, he will resort to a cumbersome, clumsy flight--sometimes crashing through branches--to the nest. All that to get one stick to its nest. That's a lot of hormones.

(This bird is one of a handful of pairs that has been building a mini-colony on the UW campus, south of Drumheller fountain. This is the third year I've seen them there. I counted four nests in one stand of trees and two in another; I can't verify if all nests are active.)