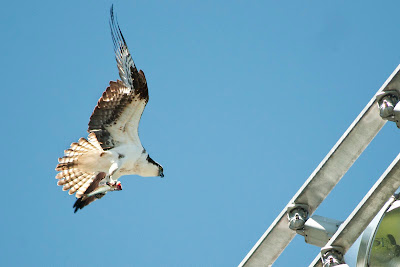 This Osprey (#1) on Lake Union careened around its desired mate (#2) for an hour, making pathetic keening noises all the while. As #1 approached #2, which was sitting on the light fixture to the right, #2 flew away. #1 didn't seem to notice the departure and approached the now empty light fixture with more keening and a courtship offering: a decapitated, bloody silver fish. 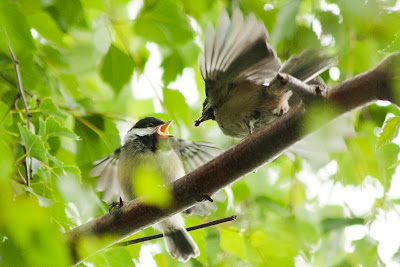 A more productive and better example of food-offering: an insistent black-capped chickadee fledgling being fed an insect by its parent on Capitol Hill.

And now...viscera! Entrails! Blood, guts, beak and gore. A juvenile Red-tailed Hawk with a just-killed meal. As I biked past a stand of cottonwoods I heard the hysterical alarm calls and protestations of robins, starlings, chickadees and crows. I knew this boded well for me and my camera (but not for the unfortunate victim and family) so I headed toward the ruckus. I'm pretty sure the kill is a robin nestling due to the dark grey feathers, size and length of legs. 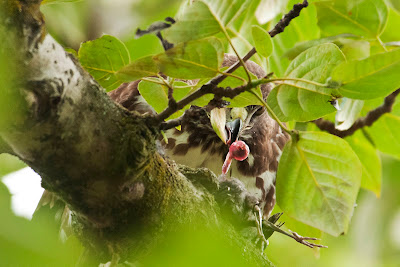 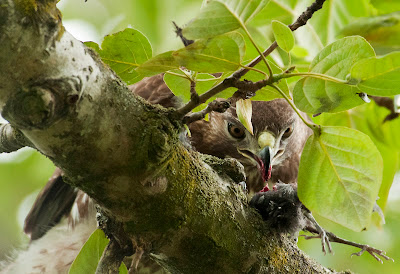 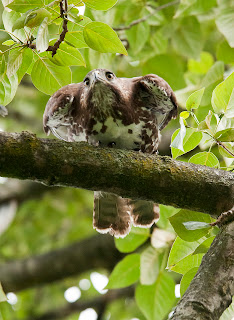 And goodbye! The hawk was escorted off the premises by all species, including an Anna's Hummingbird.
Posted by Clare McLean at 12:43 PM