The Path to Yum


"You guys are so mean!" Uncensored and admonishing, these were the first words out of my mouth yesterday.  (Yes, I talk involuntarily out loud to birds.) 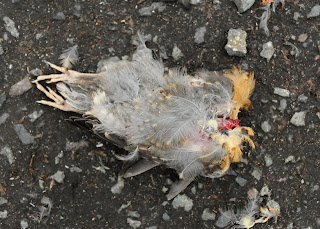 I was talking to the two crows who lucked upon a juvenile robin for breakfast yesterday. As I approached, one flew off with its head. The body was freshly dead, still warm and pliable. 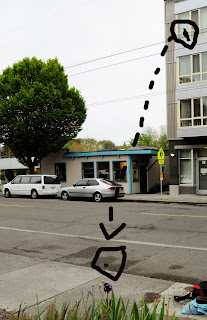 While I photographed the body, one crow stood sentry above, waiting to claim the corpse.

Many conflicting thoughts: Those damn opportunist crows. But crows need to eat. I love crows. The cycle of life. The poor bereft robin parents. Robins are plentiful and skilled procreators, at least thus far into the century. Survival is a numbers game; that's why birds lay so many eggs, sometimes more than once per breeding season. I, too, am an opportunist. I am taking advantage of the bird's death by transforming it into a blog entry. Opportunism has a perjorative implication, but in the ecological sense, it can be used in a neutral sense too, I think.

Here is a more amusing, and less successful, Attempt At Yum I saw a few hours later in Marymoor Park in Redmond: 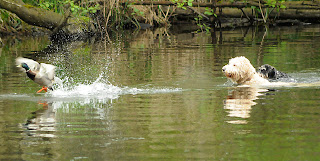 Clearly, this male mallard had found his own Path To Yum, as evidenced by his grassy beak.